The Company, which listed as Delta International on the JSE in July 2014, was the only real estate income fund on the JSE with an exclusive focus on the African continent, excluding South Africa.

“Since our listing on the SEM in June 2015, we’ve always been a proudly Mauritian company. We have a strong following on the SEM and are excited to introduce foreign shareholders that will hold their shares in Grit on the Stock Exchange of Mauritius, including strong African funds Botswana Development Corporation and Zep Re (a leading re-insurance company headquartered in Nairobi, Kenya), who both acquired shares as part of the JSE de-listing” commented co-founder and CEO Bronwyn Knight.

“We are rated in the Top 10 index of the SEM and Grit was the first international business to trade in Rupees on the exchange, allowing greater access for local investors to participate in the Company’s opportunities.

We remain very bullish on the real estate investment opportunities on the island, despite the impact of COVID-19, and are currently negotiating a strong investment pipeline spanning the office and healthcare sectors,” Knight added.

Grit, which held primary listings on both the LSE and the JSE, as well as a secondary listing on the SEM, cited poor trading liquidity in its JSE shares, complexities of being listed on three exchanges and a considerable administrative cost burden as motivation for the delisting.

The Company will maintain its secondary listing in Mauritius, an investment grade country.

The de-listing from the JSE is one of the first steps to Grit applying for a Premium segment listing in London, which is internationally regarded as the gold standard for corporate governance. A Premium Listing is also a significant component of the eligibility criteria for inclusion in the main FTSE Index series, which could further improve liquidity. 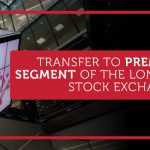